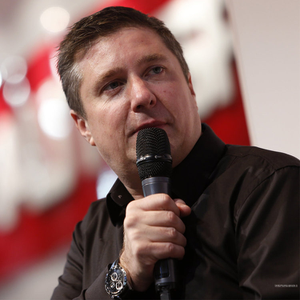 David Croft is the acclaimed commentator and presenter for Sky Sports F1 HD channel. He is widely regarded as an outstanding commentating talent famed for the passion and enthusiasm he brings to every event he covers. 2022 marks Crofty’s 17th season commentating on Formula 1. In addition to commentary David is also a popular figure with motorsport fans whom he engages with via social media and the #Ask Crofty platform. The feature has proved so popular that he has also hosted his own "Ask Crofty" TV show.

Prior to 2012 David was the F1 correspondent and commentator for BBC Radio 5live where he also reported on various other sports including the 2002 World Cup and 2004 Olympic Games, Superbowl XLI and hosted numerous boxing specials.

Away from F1, Crofty is also well known for his commentary at the legendary World Darts Championships at the Lakeside,which he covered from 2002 to 2012. He is also a respected boxing commentator having covered some major fights including Joe Calzaghe’s final fight against Roy Jones Jnr at Madison Square Garden. Recently he has been called on to present Live Darts for Sky Sports from the Premier League and PDC World Darts Championship.

In addition to commentary David has also been involved in major international movies. He featured as the voice of "Lofty Crofty" in Disney's Planes movie and hosted the live global broadcast of the premiere of the movie "Rush" Gamers will also recognise Crofty’s voice from the F1 2021 racing game, the latest in a series he has voiced since 2011.

Away from the track Crofty is always in demand hosting live events and engagements such as: Presenting the Autosport International Live Action Arena, Moderating and hosting senior level client hospitality events and Thought Leadership initiatives for organisations such as the CBI, Tata Communications, Exxon Mobil and Thomson Reuters. Conducting after dinner speeches for such companies as Mercedes Benz UK and United Biscuits and hosting the prestigious World Branding Awards.

Crofty also continues to support amazing causes such as Sporting Memories and in 2014 became an Ambassador for the children’s charity –Starlight.